Hit enter to search or ESC to close
Research

Multiple-Input Multiple-Output (MIMO) vibration control tests are able to closely replicate, via shaker excitation, the vibration environment that a structure needs to withstand during its operational life. Such tests represent the most advanced alternative to overcome the sequential single-axis test limitations and, despite the theoretical approach has been widely accepted since 1958, the extremely high level of required technology makes them still considered as a pioneering testing method.

In this context, the research activity is focused on the definition of reliable fully automated methods to build up the MIMO reference matrix in the common scenario in which operational measurements are missing and the test specifications are provided in terms of Single-Input Single-Output PSDs only. The final purpose is to overcome those hypotheses at the basis of the control strategy that limit the practical feasibility of the MIMO tests. 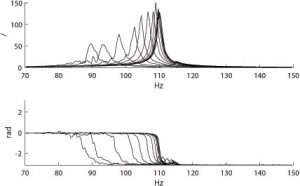 Reliability represents a mandatory feature for any high quality mechanical system, from complex machines to low level components. For this reason, durability tests have become extremely common in the modern industrial processes, even if the extensive time interval required for their execution is still a serious flaw.
Accelerated dynamic tests are nowadays considered the most suitable solution to overcome this limit: the common approach is to define the stochastic excitation by means of a Power Spectral Density spectrum profile adopted from available standards. It is a common practice especially in aeronautical and automotive industry to maintain an internal record of already established tests specifications. However, the current standards are based on restrictive hypotheses, which strongly reduces the capability of the test to reproduce real operating conditions. Standard tests are intended to be implemented on single-axis shakers, neglecting so the effects produced by the excitation components in other directions that are actually present in real working environments. Studies available in the literature have demonstrated that these methodology may easily lead to failure modes not observable in actual operational conditions.

By taking advantage of the triaxial electrodynamic shaker available at MechVib Laboratory, the research activity if now concentrated on the definition of experimental methods for high-fidelty triaxial accelerated tests and analytical theories for correlating the obtained results with the actual damage level of the test components.

The vibration signature of a mechanical component contains fundamental information regarding its state of health and its dynamic behaviour. Effective experimental vibration measurements and virtual simulation are necessary for improvement and optimization purpose.